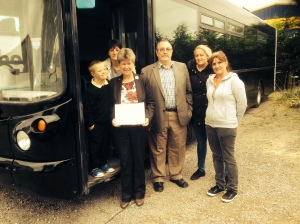 Jane met  a young Barry boy who has inspired his friends and family to set up a sensory bus,  for use in helping people with disabilities.

When the mother of eight-year-old Mason Fry pointed out that a double-decker soft-play bus project planned by her friends Paul Shaw and Sylvia Williams would be inaccessible to Mason, who has Downs Syndrome, they changed tack and came up with the idea for the sensory bus – the first in the UK.

The bus’s interior will be based on specialist sensory rooms that use light and texture to stimulate the senses.  Sensory rooms are often used in the treatment of children and adults with disabilities such as autism, dementia and ADHD or those with learning difficulties or mental illnesses.

Jane heard how Paul and Sylvia, who have put in £15,000 of their own money, are now hoping to raise funds to fit out the bus with equipment such as bubble tubes, fibre optic lighting, big bean bags and tactile toys. She said: “It is a fantastic scheme. It was wonderful to hear how Paul and Sylvia have been inspired to make a difference to people’s lives because of their friendship with Mason and his family. I wish them every success.”