How the EU Benefits the Vale of Glamorgan 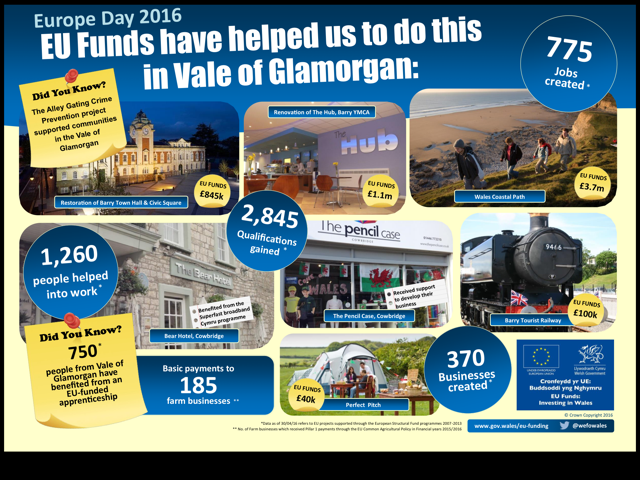 “On Wednesday, there was a debate in the Senedd on the European Union, which proposed that Wales would be stronger, safer and more prosperous if it were to remain a part of the EU.

The debate was an example of cross party working as it was promoted by Eluned Morgan (newly elected Labour AM for Mid and West Wales) but supported by AMs from other political parties – Lord Dafydd Elis Thomas AM (Plaid Cymru )and David Melding AM (Conservative).

As the Vale of Glamorgan AM, I am conscious of how Britain’s membership in the EU has affected people living in my constituency. For example, 750 people in the Vale have benefited from an EU-funded apprenticeship and the EU Social Fund has also supported over 400 young people into jobs via the Welsh Government’s hugely successful Jobs Growth Wales Scheme.

The restoration of Barry Town Hall and Kings Square was funded with the help of £845,000 from the EU and the renovation of the Barry YMCA Hub included £1.1m of EU funds.

The Rt. Rev Rowan Williams, former Archbishop of Wales and Canterbury, recently highlighted that the past 70 years have been the longest period of peace in Europe’s history. Indeed, the EU was formed out of the horror of the Second World War to unite countries economically and politically in order to secure lasting peace.

In the 21st century, as Rev Williams stated, many of the challenges we in Wales and the UK face today – poverty, climate change, terrorism, providing the stability that is essential to tackling the migration crisis – can only be addressed in a European, even global context.

As Gordon Brown has said this week, we should be leading the EU not leaving it.